Many years ago (in 2001), I had my first romance, Felicity’s Power, published in Australia by the long-defunct Power of Love Publishing. In her call for submissions, the publisher, Jenny Millea stated: “No worn-out tropes and no Secret Babies.” When I saw that, I said: “Hey, that’s the publisher for me.”

As Jenny said, “we have reliable birth control these days. There is no excuse for an accidental pregnancy with someone you hardly know.” She’s right. And I think there are exceedingly few men who would be thrilled to bits if they suddenly discovered they had an unplanned son or daughter somewhere in the world. Equally annoying, are stories in which, although the heroine and hero barely know each other, she discovers she is pregnant. After that, their budding relationship is entirely built around the future baby. Will they stay together when the going gets rough? I doubt it: they hardly know each other.

Another trope I dislike is The Deep Misunderstanding. I just wish the two people who are so attracted to each other would start communicating instead of sulking in corners for a hundred pages or more.

As a writer of romance, I like to portray real-life situations with real people. My heroes and heroines need to have activities they can share, ideas that coincide, and realistic goals. They have to be interested in getting to know each other, and we have to be able to believe that their love will last — not because they have a wild and woolly sex life in very strange combinations — but because they are appealing people, and they know how to give.

Yes, some romances don’t begin smoothly, but if there’s a good reason for that, so much the better. In romances, we can learn new ways of working out problems, or we take pleasure in seeing love growing slowly and steadily.

In my romance, The Turkish Affair, my heroine, Anne, has run away from her former life, and come to live in a small village in Turkey. When she meets the very charming Renaud Townsend, an archaeologist at the nearby Hittite site, she is forced to acknowledge how attracted she is. However, since she has run from her problems instead of solving them, she finds herself caught in an almost untenable — and very dangerous — situation.

Excerpt from The Turkish Affair 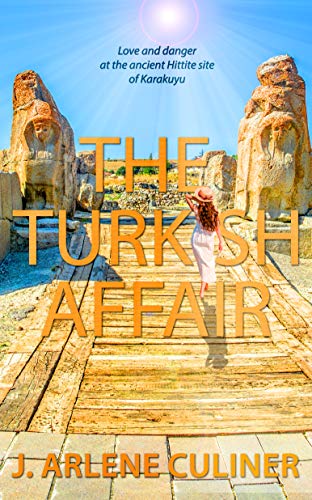 She was free to wonder about him again, just the way she’d been doing since first meeting him. Wondering what sort of person he was, about the places he’d been to, the life he’d lived. Was he married? Was he attached to a university? She warned herself not to delve too deeply because she couldn’t give out truthful information in return. Still, she wanted to know.

“I’ve an idea,” he said, breaking into her thoughts. “The heat’s gone. We can actually walk around without being cooked alive. How about giving me a guided tour of this town?”

She could think of a million reasons why not. Instinctively, she knew if she were alone with him, out there in the dusky evening, the situation would become more intimate, more personal. And intimacy could lead anywhere. She raised her eyebrows in mock surprise. “It’s not a very interesting place. What’s wrong with just sitting here?”

Renaud’s eyes darted toward the counter where Necmettin was standing, observing them.

“To be honest, I can’t say I’m feeling comfortable. That man has been watching me since I arrived. I feel like a fat coypu sharing space with a drooling piranha.”

Anne had to laugh. He was right, of course. Here, gossip spread more quickly than melted butter on a hotplate, and since Gülkale was, at best, slow-moving, eventless, people were constantly snuffling after the next tidbit. Still, she hesitated, tempted to take him up on his offer, knowing that something as innocuous as a walk was chancy. His voice was too caressing. The heat of his body, his male scent, and something else—something indefinable—was drawing her to him. No temptations. She hadn’t run this far just to get entangled with yet another fatal Romeo.

(You can read the first chapter of The Turkish Affair here: http://j-arleneculiner.com/page-2-book4-turkish.html)

You can hear the audiobook version here: https://soundcloud.com/j-arlene-culiner/the-turkish-affair-chapter-one

Writer, photographer, social critical artist, musician, and occasional actress, J. Arlene Culiner (Jill Culiner) was born in New York and raised in Toronto. She has crossed much of Europe on foot, has lived in a Hungarian mud house, a Bavarian castle, a Turkish cave-dwelling, on a Dutch canal, and in a haunted house on the English moors. She normally resides in a 400-year-old former inn in a French village of no interest and, much to local dismay, protects all creatures, especially spiders and snakes. She particularly enjoys incorporating into short stories, mysteries, narrative non-fiction, and romances, her experiences in out-of-the-way communities, and her conversations with strange characters.