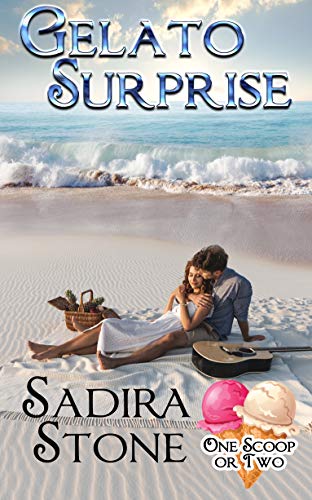 She came to the beach to find herself—and found him.

Forty-two-year-old divorcée Danielle Peters ends up alone on her family’s annual beach vacation. Maybe time to herself is exactly what she needs. That and gelato from her favorite ice cream shop. But when the owner’s intoxicating young nephew offers more than sweet treats, she’s tempted to indulge in a hot summer fling before returning home.

Thirty-one-year-old Matteo Verducci craved a fresh start to mend his broken heart, and he’s found almost perfection in Ocean View, where he scoops gelato by day and crafts furniture by night. But when a sexy older woman stops to sample his wares—Mamma mia! He only has two weeks to convince her their passion is more than a delicious surprise.

Still holding her hands, Matteo drew her to a patch of shade beneath a cluster of anemic palm trees. He flashed an adorable, shy grin that crinkled the corners of his eyes. “Danielle, I really like you, but I don’t want you to feel like I’m pressuring you to do something you’re not ready for.”

I’m ready! Her id hollered and waved like an over-excited second grader.

He twined his fingers with hers and continued. “Unfortunately, Sal needs me this afternoon, and I’m driving him to Aberdeen tonight. How about tomorrow? We could do a picnic lunch on the beach. There’s a special spot I’d like to show you.” He dipped his head and nuzzled the sensitive crook of her neck. “Are you still up for it? Or have I scared you off with my grabby hands?”

The heat of his breath scrambled her brain. No doubt about it, he wanted her. And she wanted him so badly her teeth ached.

She sucked in a deep breath. “I’ll bet you get a lot of single women tourists throwing themselves at you.”

He shrugged. “A lot of women flirt. Doesn’t mean anything.” He rested his forehead against hers. “I collect drawer pulls, and doorknobs, and picture frames—not women.”

She pressed her lips together and dropped her gaze to their joined hands. This guy definitely earned an A-plus in handholding. Never had such a simple act felt so intimate, so sensual. The way his thumb traced arcs across her knuckles made her imagine what those hands could do on her bare body, stretched out on her king-size bed, the sea breeze lifting the curtains while his hands brushed over her breasts…

Her common sense made a last, futile stand. “Matteo, I’m old enough to be your—”

“No.” He squeezed her hand. “You’re not. Though you are old enough to be my sexy babysitter.” He quirked an eyebrow. “Every guy’s fantasy.”

Where to Buy Gelato Surprise

Ever since her first kiss, Sadira’s been spinning steamy tales in her head. After leaving her teaching career in Germany, she finally tried her hand at writing one. Now she’s a happy citizen of Romancelandia, penning contemporary romance from her new home in Washington State, U.S.A. When not writing, which is seldom, she explores the Pacific Northwest with her charming husband, enjoys the local music scene, plays darts (pretty well), plays guitar (badly), and gobbles all the books.