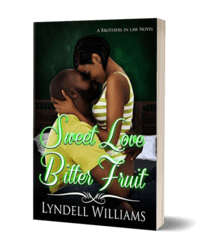 Lyndell Williams, welcome to Romance Lives Forever. I’m Kayelle Allen, author and owner of this blog. Happy to have you here! We’re excited to find out more about your hero…

Marcus Kent is never bored. He has an intense schedule at work. When he gets a minute, he will chill with his boys Simon, Faisal, and Quinn and then head home to his wife Toni. For Marcus, twenty-four hours is not nearly enough, so he needs to be strategic about his time so he can fulfill all of the demands on him. He’s all about getting things done with efficiency.

What kind of food would he impulse buy if hungry?

Marcus is a carnivorous alpha. Red meat is his food of choice, especially burgers. He doesn’t eat just any meat. Although he is not Muslim, he prefers halal meat, so he will stop by his favorite halal spot or another one (NYC is packed with them) to grab a quick bite.  Of course, he’ll have to go a little longer on his daily morning run but having some ground beef goodness is worth it.

Describe the kind of clothes he prefers to wear.

Marcus has a walk-in closet with a wall stacked with high-end sneakers. They are his award for working hard at the community center he directs, keeping wife, Toni happy and being there for family and friends. He sheds his business suits as soon as possible and slaps on a pair of those bad boys with some sweats and a tee-shirt to run through Harlem or have a game of basketball, completely elephant trunkin’ it.

Does he know how to fix things?

Marcus’ father, Deverill made sure his son was a “real man” who can fix things. He does minor repairs around the apartment and at the community center in a pinch. He can take a hammer to a nail or wrench to a pipe, but with his busy schedule, anything bigger would have to be done by somebody else. So, he has the contact information for plumbers, electricians, etc. right on his phone. A natural leader and delegator, he makes sure things get fixed as soon as possible.

He tried to do something and it went badly. Tell us about it.

A big miscalculation Marcus made was when he thought he was protecting his younger sister, Regina from his best friend, Simon. He knew Simon was a playa and wasn’t even going to let his sister get used. When he found out about them, he blew a fit and went straight to Simon to drive a wedge between them, not knowing that Simon was actually in love with Regina. He caused a split between the two of them and broke his sister’s heart.

How does he act around children he doesn’t know?

Marcus is thoroughly in love with his niece, Justine. He will do almost anything she asks, including sit on the floor with a tiara on his large, bald head, holding a tiny plastic teacup. The kids at the center where he is in charge adore him. He loves the little ones and planned to have a bunch of them. He gave up on the dream of fatherhood when he and his wife Toni went through multiple failed in vitro attempts.

What is he like first thing in the morning?

Marcus is a morning person, times five. He is usually up before the crack of dawn and heading out to pound the city pavement with a morning run while the plans for the day go through his head.

Can he use chopsticks?

Marcus and chopsticks do not get along. Simon has tried to teach him but to no avail. It is one of those things that he is comfortable with not being able to do and just reaches for a fork.

Coffee is the first drink Marcus reaches for after his morning run. He likes it with half and half and no sugar. Sometimes he will stop by the coffee shop on his way to work and treat his staff to cups, ordering each just the way they like it from his memory.

What apps would he have on his phone?

Marcus is all about productivity, so he has a bunch of calendars and appointment apps. He has a word processing app so he can write while traveling as well as a speech-to-text app to make notes. He manages the community center projects with his team using a project management app and downloaded a couple of games for those times he’s with his niece Justine.

Unfortunately, he is a die-hard IOS fan. I’ve argued with him and Simon about it, but he won’t budge.

Marcus sports a long-stubble beard that he keeps super soft through careful grooming and conditioning. Toni loves and always plays with it whenever they’re alone.

Marcus refuses to pierce anything or stain his smooth chocolate skin with ink. He is all about treating his body as a temple, and you don’t put holes in or graffiti on the walls of a temple.

As a city dweller, public transportation is a must most of the time. Marcus has a metro card and travels the city underground in the subways. When he travels outside the city to places like his parents’ house on Long Island, he has his black Dodge Charger taken out of the garage and hits the road with Toni.

Marcus and Toni have little blue cans underneath their sink, and he made sure the center has plenty of big ones around the facility and even at the playground and basketball courts. One of the things he budgets for each year is to have a service take away the recycling. He makes sure the material is sorted and leaves redeemable bottles and cans at the front door for people to take.