I think humans have an innate appreciation for the power contained in language. We have a need to communicate from the moment we leave the womb. Crying, whimpering, whining and cooing are all methods that infants have to convey their feelings and desires.

It can be so strong that many mothers and primary caregivers learn the meanings behind each utterance coming from the tiny person, finding it almost impossible to ignore. The impact of our children’s infant cries frazzled each one of my nerves, motivating me to satisfy or wreak havoc on whatever or whoever was upsetting them. People didn’t start calling me Mama Bear for nothing.

Yeah, kinda like that. So, knowledge about the power of language is something intrinsic. We know its influence on those around us. When people are past the infancy, “cry to get what I want stage”, it is important to recognize how compelling words can be on one’s mindset and those around them, especially words strategically used to convince, inspire, anger and degrade—some of which may become branded in one’s psyche, influencing their internal dialogue and actions.

For me, it was one word spat at me while I argued with What’s His Name in Ms. Zeigler’s third-grade class. He was a little White boy who wore glasses. That’s all I remember about him. I can’t even remember why we argued, but what he called me is indelibly etched in my memory—nigger. “You’re just a dumb nigger,” he said with a triumphant sneer on his face. Our classmates around us started laughing, obviously in on some kind of joke of which I was not a part. The word was ambiguous to me at the time. I knew it made the adults in my life very mad and I could never utter it. Its exact meaning escaped me, and I was left mute while all the White kids around me (the only other Black child bent her head)  had a grand time.

“You’re a nigger,” I screamed at him. That just made everyone laugh harder and Ms. Zeigler shoot from behind her desk. She was not laughing and got down to the bottom of the reason why that word was being used in her classroom.

Yup. She was not happy, and the class got an earful. What’s His Name did not fare well—I did not either. I was not in trouble. She dried my tears and told me to ignore my scrawny classmate, who shuffled out of the door with a note to the principal. I couldn’t though. His word hurt. It echoed in my head for the rest of the day, and it was the first thing I asked my mother about when I sat at the kitchen table after school sipping chocolate milk.

My mother responded similarly to Ms. Zeigler but not to me. She smiled and passed me some cookies before walking to the phone on the wall. Whoever answered her call got the Ms. Zeigler treatment. Just like my teacher, she didn’t repeat the word, but it was clear that she was not going to let it be used on her child unchecked. The next day, What’s His Name apologized, and the word was never used again—at least not in Ms. Zeigler’s class.

I think this is the part of my tale where I’m supposed to express how bad I felt about being Black. I didn’t though. So, there was Solomon moment when I internalized hate for my Blackness. Solomon…the Todd Bridges character on Little House on The Prairie.

Anyway! I grew up in a pro-Black family and learned to love my melanin. Being one of a few Black kids in a predominantly-White wasn’t going to make that disappear.

I recognized how important it was to not only talk but use the right words to attain the desired effect as well as some unanticipated ones. What’s His Name used a word from his low-key racist arsenal to strike at and shut me up. He did because of the visceral feeling the slur had for me and many Black people. I wanted to learn how to do that, although, not in a hateful, bigoted way.  It’s what drives my work as a writer and author.

It wouldn’t be until college that I acquired and honed skills to interpret and craft words, using a range of prose (and a tiny bit of poetry) to harness the resilient power of language for liberation and resistance. I have become a type of word warrior, using them to strategically confront and defend.

I also help others to fine-tune their word crafting and convey impactful language that affects positive change and shifts paradigms, which is critical. It’s not the pen but the hand wielding it and the mind using its ink to construct impactful language that is mightier than the sword.  Knowing which tools to use can make a big difference.  Anybody can say stuff, but it is the people knowing how to select and use words to persuade, dissuade, validate, and discredit who harness the essential power inside language.

3 thoughts on “Pens, Knives, and Guns: The Power of Crafting Words” 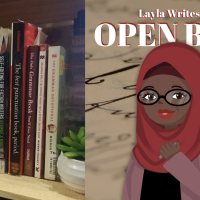